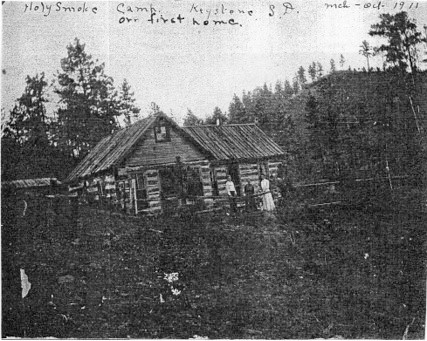 The Black Hills of South Dakota is rich with history.

From the Mount Rushmore National Monument, Crazy Horse Memorial, and the Paha Sapa – more commonly known as the Black Hills – there is our country’s history around every evergreen tree and our property, Holy Smoke Resort formerly Holy Smoke Camp, is no different.

It was 1874 when gold was discovered in the Black Hills and since then, our lovely area has been in continuous connection with some of the United State’s greatest known achievements in systematic gold mining.

Back in the day, The Golden Return Mining Company owned the Holy Smoke Camp and consisted of approximately 100 acres of land, right in the motherload of the Black Hills belt, where a number of buildings necessary for the operation of a gold mine were built. Whim houses, the superintendent’s home, the camp (aka miner’s quarters), a boarding house, a dynamite house, a blacksmith shop, stables – accommodating 24 horses, and numerous other buildings were constructed.

Predominant historical figures are traced back to Holy Smoke Resort, Keystone, and the Black Hills of South Dakota. However, the most significant would be Colonel James A. “Big Hat” Clark.

Big Hat Clark was one of the most important mining men in the Black Hills during the 1900s. Today, because little history of early day Keystone has been saved, he has all but been forgotten. Clark came to Keystone in 1895 as a mining man, prospector, locator, and promoter for the Golden Return Mines. He gained the reputations as THE leading mine expert of the Black Hills and of America. He covered the entire west, from Mexico to Alaska, to prospect and report on the likelihood of a paying gold mine investment. Then, in 1904, he reached the pinnacle of his career here at Holy Smoke.

At the time, he managed the largest group of mines under one pan in Pennington County; nearly 3,700 acres of land! The largest portion lay west and northwest of Keystone, extending from Copper Mountain near Sheridan, to Harney City with one large section laying southwest of Keystone on Little Squaw Creek. The land encompassed everything near Keystone, covering a wide strip of the most valuable mineral section of the country.

However, as the years passed a lack of new gold left Clark struggling to raise funds for the mines. The struggle for investors reached its peak when Clark found himself stranded in Michigan. After explaining the situation to his good friend, John Boland, a box was set up in the store and all of Clark’s friends raised the needed money for him to come home; sacrificing what they could, as they were not people of means themselves. The poor miners had sold their violins, music boxes, and everything they could do without to get Clark back to Keystone. Boland would write down every item given and Clark saw they received as much of their money back as he was able to raise.

“He is truly one of our own and Keystone takes care of its own,” the people would say.

Unfortunately, Clark would soon sell the remaining horses in the stable and everything Clark could spare from his home was sold to pay bills. As Clark became older, he moved from the area to live with his only child.

Keystone will never forget this man and the promoter who added so much color to their lives.