Fall Festivities in the Black Hills

Holy Smoke Resort might be closed for the season, nevertheless there isn’t a lack of entertainment buzzing through the Black Hills. November is jam packed with entertainment from Concerts, Beer fests, Whiskey fests, and tons of Trivia. Thankfully Holy Smoke Resort is nestled in the middle of the Black Hills, making it a beautiful, little drive through scenic roads to the surrounding cities. Take a look at this exciting itinerary of local Black Hills Entertainment. Grab your keys, a dance, trivia, or drinking partner and let’s go!

Hitting the road, it’s 35 minutes to the Custer Beacon. This adorable spot is a scratch- kitchen restaurant, craft beer and wine bar, with dynamic gathering space and premier live music venue. A space to eat, drink, play and be together. The Custer Beacon is putting on the Custer Bluegrass Jam, November 16, 23, 30 from 6:30-8:30 pm.

Traveling the opposite way, is a 26 minute drive to Rapid City. Rapid City is the known gateway to Mt. Rushmore an iconic sculpture of 4 U.S Presidents. The “City of Presidents” a series of life sized statues, span several blocks through downtown Rapid City.  Entertainment can be found at nearly every bar and brewery. Here is a small list to get you started! 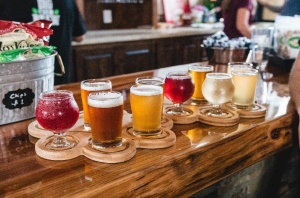 Sturgis takes 1 hour and 12 minutes from Holy Smoke, is a breath-taking view of the Black Hills and holds many events throughout the years. Sturgis is famous for the annual Sturgis Motorcycle rally. Sturgis home to food, trails and fun any time of the year. Take a peek at some of the entertainment happening this November.

Deadwood is 59 minutes away from Holy Smoke. Deadwood is not an ordinary historic town, it holds many attractions to play indoors and outdoors, from gambling in casinos all day and night, enjoying adventures, hikes, mountain bike rides, ATV trails, skiing and of course entertainment.

At the Deadwood Mountain Grand;

Spearfish takes 1 hour and 17 minutes to arrive from Holy Smokes Resort. There are five convenient, breathtaking routes you can take to arrive in Spearfish. Spearfish is a year round playground for outdoor adventure lovers and is known as the “All Four Seasons” capital of South Dakota for recreation. Here are some entertainment ideas you may enjoy;

We hope you enjoy the stunning fall views as you take all the scenic routes to and from these surrounding Cities. Enjoy the time spent with your friends and family if you attend any of the local entertainment. Stay safe, always have a DD if you plan to drink and most of all have a blast! And don’t forget that Holy Smoke Resort is always taking reservations! So book them before someone else does!